Trade Unions and the European Union

Ahead of the UK’s referendum on continued membership of the European Union, the Trade Union Forum held an event to explore the roles that Trade Unions have had in shaping the public debate on EU policies, reflect upon the roles the Unions played in the 1975 referendum, and offer suggestions for Trade Union engagement in the ongoing debate.

The conference also addressed the issue of what is best for working people. It is widely observed that the debate has thus far been largely focused on tensions within the Conservative Party, so the Forum hoped this event will ensure an alternative voice was heard in the debate.

Prior to the event, TUF Chair John Edmunds held an interview with Share Radio to elaborate on these subjects further: 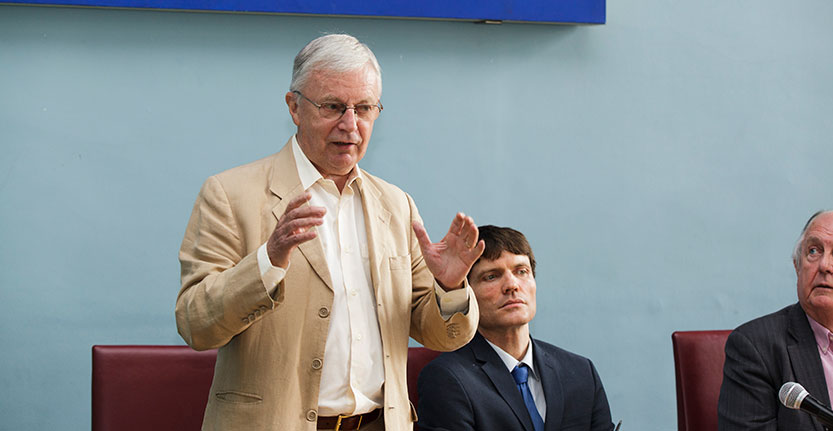 In our opening session, Dr Andrew Blick (Director of History & Policy, KCL) and John Monks, Baron Monks (former Secretary General of European Trades Union Congress), offered a historical perspective on both the 1975 referendum and the evolution of Trade Unions’ relationship with the European Union.

Dr Andrew Blick opened his talk by reiterating that there is no question that the UK is a European State, but questions remained regarding what the UK’s relationship should be with the rest of the Continent.

Andrew argued that, unlike other EU Member States, there are some exceptional aspects of Britain’s experience have resonated across the political spectrum – namely, the UK’s late arrival in to the European project, which has meant that there has always been British resistance to the idea of sharing sovereignty.

Much like Cameron’s current tensions with members of his party, and potential electoral threats from UKIP, Dr. Blick noted that the 1975 referendum was held largely due to divisions of opinion within the governing Labour Party. Wilson’s attitude to Europe was complex, and the referendum, preceded by a negotiation, was the only way he believed he was able to hold the party together.  Dr Blick noted that, as a political manoeuvre it was successful, but in the longer term the Labour Party still fell apart.

Andrew closed his presentation by reminding delegates that the 1975 Referendum did not make the issue of “Europe” go away, either for Labour government or for the country as a whole and that there is no reason to believe the issue will go away after the referendum this year either. Later that week, Dr. Blick was interviewed about the themes of the conference on an episode of BBC Daily Politics

WATCH: Where do trade unions stand on the #EUreferendum?@adamfleming looks at changes between 1975 and 2016 votes https://t.co/PR84m5Hezv

John Monks opened his talk by echoing Andrew Blick’s assertion that Referendums tend not to settle things, but this unlike 1975, the Trade Union world is fairly united in favour of remaining in the EU, which is a significant change from 1975 when the TUC was opposed to membership. After 1975, the TUC decided to participate in the EU structures and work with other unions eventually becoming a key player in the foundation of the ETUC (European TUC). The idea that workers have dignity, rights, and should be protected was endemic within the EU and led to concrete, if limited, results in the 1980s, such as protection against dismissal.

Lord Monks notes that these aspects of the EU became increasingly attractive to Trade Unionists, who saw it as an alternative to Margaret Thatcher and the predominant political ideology of free market liberalism. The early 1980s saw many manufacturing jobs being lost in Britain and, in 1988, Jacques Delors was invited to address the TUC. John argued that the repercussions of his speech are still with us today, namely the concept of a single market, regulated by rules relating to both employment conditions and environmental terms. His vision was attractive to the TUC, so was it as anathema to Mrs Thatcher. As a result the TUC and Labour Party moved their position from hostility to the EU to a favourable attitude.

The 1990s was a very productive phase for social legislation emanating from the EU, which the British government was not able to block (such as health and safety, holidays, equal treatment for part time workers and sex discrimination). However, from 1997, there was a reluctance to accept further social legislation in Europe, with the British government playing a significant role in restricting any further measures.

Given the work that still needs to be done to create a Social Europe, Lord Monks concluded by saying he was a strong advocate for Britain remaining in the EU, on the grounds that it was in the best interests of working people. 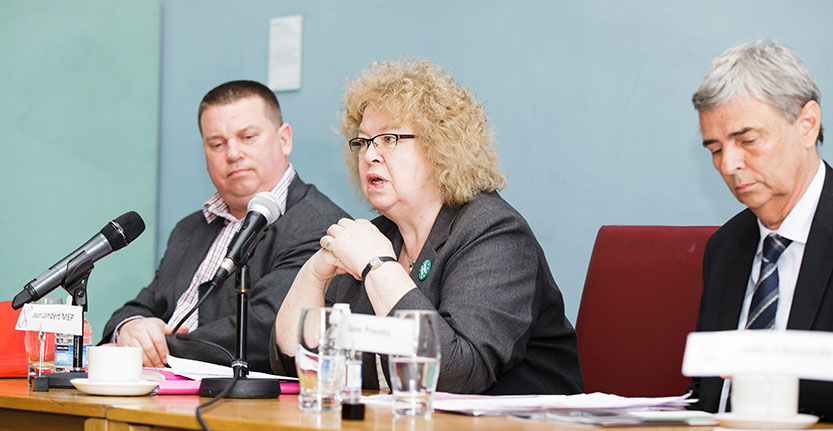 Jean Lambert MEP largely offered her personal reflections of working with Trade Unions in her work as an MEP. She opened by describing how people in Europe continually refer to the idea of social partnership. Regulation can be a positive development, not only a restriction of freedom of action. She explained that, because the EU no single group has a majority, it is therefore necessary to work with other groups from across the political spectrum.

Jean also explained how the Social Agenda – and opportunities for Trade Union engagement – has grown in recent years. It was no longer just the Employment and Social Affairs Committee that dealt with such issues, but also the Economics and Monetary Affairs Committee and the Industry and Energy Committee, which are beginning to regulate increasingly on social issues such as pensions regulation and fuel pricing. Ms. Lambert also highlighted the international dimension of Trade Union engagement, citing her own experience of working in South East Asia on improving conditions for those working in the garment industry as part of the EU Free Trade Agreements.

Ultimately, Jean Lambert highlighted that the European Union is a largely consultative process, where Parliamentarians and Stakeholders have to work in partnership for legislative change. She recalled how she was surprised when first elected as an MEP that someone from the (generally conservative) European Peoples’ Party in the Netherlands had a long involvement with trade unions.

Jean concluded her speech by stating that  the Greens – both at the UK and EU level – are campaigning for an economy that works both in the interest of working people and the environment. She believes the United Kingdom is better off “in” Europe to meet these challenges and that the Trade Unions have been crucial in making these arguments heard in Brussels & Strasbourg.

Dave Prentis opened his talk by explaining how Unison – a union which recruits public service workers and represents public services, as well as their workers - has a history of scepticism towards the EU and the benefits of free trade. The union’s position has changed following a programme of asking members for their opinion on the EU. To their surprise, only 17% of local representatives said the union should keep out of the debate. Of those who said they should be involved in the debate, 90% said they should be involved on the “Remain” side. All their national groups said the union should campaign to remain. Dave also offered an interesting titbit of information – that a high proportion of Union’s members are women, who were more likely to back “remain” than their male counterparts.

Mr. Prentis acknowledge that unionism is changing. It is no longer a few activists who determine policy - Members as a whole want their Union to represent their views. Members have also said that they wanted to know more about the issues and make up their own mind, not be given instructions on how to vote. He stated that the three issues of greatest concern to members are:

c) The impact on public services, especially the NHS.

As a result of these concerns, Unison concluded that it will be recommending to their members to vote “Remain”. He concluded by expressing his belief that the Unison’s attitude should be to work together with other Public Service Unions across Europe to campaign for change within a reformed EU.

Alex Gordon countered Dave Prentis’ argument by claiming that, when people talk about the achievements of ‘Social Europe’ there is a difference between what is claimed and the experience of workers. He argued that workers are generally sceptical of the claims made by Eurocrats, as they do not see the benefits of Social Europe. Drawing on the position of his own Union, The RMT, Alex explained that, since 2010, they have been campaigning for a Referendum on the UK’s continued membership of the European Union, and their policy has always been that, in such a referendum, the RMT would recommend the UK leaves the EU.

Mr. Gordon argued that workers are concerned about the complexity of the EU and that, particularly in the Public Sector, there is a perception that public services are under attack from the EU by numerous liberalisation Directives. More recently, Alex also argued that TTIP, and the EU’s secret role in the negotiating process, was a growing source of concern.

Turning his attention to the Free Movement of Labour – which is stressed is a different issue from immigration - Alex demonstrated how, in his field of transport, employment agencies would regularly recruit workers from Eastern Europe to undercut the wages of British cleaners, who are often themselves immigrants. He argued that these practises adversely affected BAME workers, particularly those of Afro-Caribbean heritage, who tended to work in lower paid jobs and were increasingly suspicious of a system that allows employers to pick workers from the lowest wage parts of Europe.

Alex argued it was difficult to see the benefits of Social Europe, when one sees high rates of unemployment in Southern Europe, particularly Greece. He also asserted that benefits claimed from measures such as the Working Time Directive, which are easy for employers to evade, jar against practices such as Zero Hours Contracts, which are seen to be broadly facilitated by EU edicts.

Alex closed his speech by highlighting that the two major unions advocating to leave - RMT and ASLEF - are both in the transport sector. He hypothesised that this was due to the fact that the transport sector has borne the brunt of the EU’s liberalisation Directives – such as the EU Railway Package – which has had an adverse effect on the working conditions of many of their members.

Prof. Philip B. Whyman’s Opinion Article “The British Trade Union Movement and the European Referendum: What can we learn from the past?”