The Oxford School of Industrial Relations: the 1965 Donovan Commission and some historical lessons

The Oxford School of Industrial Relations 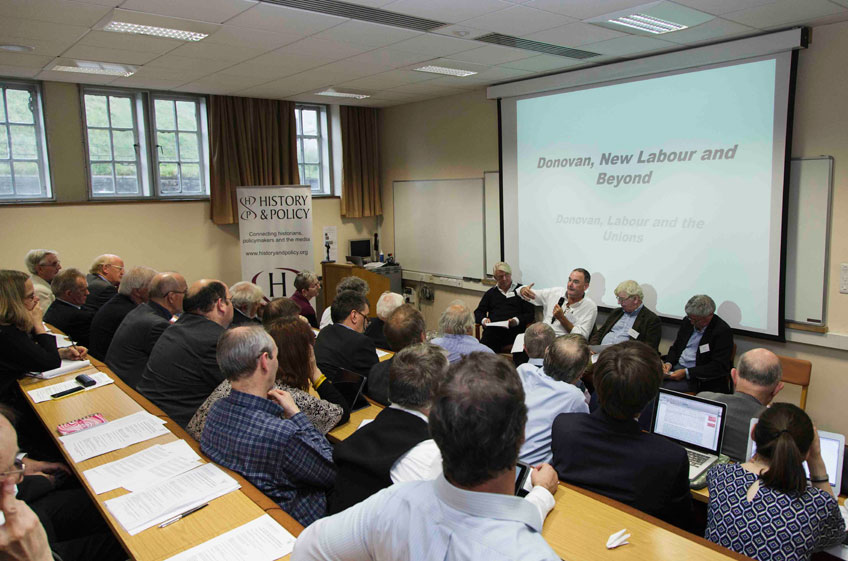 PHOTO: Jon Cruddas MP in discussion at the The Oxford School of Industrial Relations conference in Nuffield College, Oxford.

On Saturday 24 October 2015 around 70 Industrial Relations academics, Historians, Trade Unionists and Managers gathered for a day conference at Nuffield College, Oxford to reflect on 50 years of Industrial Relations academic research and public policy. Nuffield’s association with Industrial Relations began in 1949, when an ‘Oxford School’ began to form around Hugh Clegg and Allan Flanders, that later made a major contribution to the 1965-68 Donovan Royal Commission on Trade Unions and Employers Association. Another key Nuffield figure, associated with that ‘School’, Lord McCarthy, died quite recently. The Warden of Nuffield, Andrew Dilnot, opened the day and Peter Ackers introduced the ‘Oxford School’. Next, two former members, George Bain and Willy Brown reflected on ‘The Oxford School at Donovan’ and two trade union leaders, John Edmonds and Sue Ferns, discussed the wider implications. John Cruddas MP then led a discussion of ‘Labour and the unions: Donovan, New Labour and beyond’, with contributions from two trade union leaders, Jim Moher and Roger Jeary. Finally the conference looked forward critically to ‘Employee Voice and work today: legal and voluntary responses’, with contributions from the academics, Linda Dickens and Jimmy Donaghey, and the Trade Union leader, Sarah Veale.

See the full programme of the Oxford School of Industrial Relations conference.

Listen to the conference audio or download from iTunes

Images from the conference