The Rise of Managerial Bureaucracy: Reforming the British Civil Service

In 1969, the historian Henry Parris published his seminal work Constitutional Bureaucracy, where he gave an account of the changes in British Central Government from the beginning of the nineteenth century to the middle of the twentieth century, identifying the transition from a patronage bureaucracy to a constitutional one. Nearly fifty years later, many other institutional transformations have occurred, marking the transition from Parris’s constitutional bureaucracy to a new, managerial bureaucracy that originated from the political, economic, cultural and social changes that had begun by the end of the sixties and came of age by the end of the seventies.

Managerial Bureaucracy provides the history of that last transformation, which took place between 1979 and 2007, the period of the Thatcher, Major and Blair Governments, focusing on the Civil Service, the bureaucracy of the central government of the UK.

The period examined is particularly important for this institution because it represents nearly thirty years of waves of reforms inspired by neoliberalism, monetarism and managerialism with the rise of the New Public Management paradigm. The reforms were an attempt to answer the fiscal crisis of the state in the late 1970s which led to the rollback of the State in the 1980s. Moreover, by the 1990s their aim became to manage effectively the pressure on government imposed by the expansion of global markets, rise of globalisation and 24/7 communication in the nineties and in the new century. These reforms informed a cycle that was completed just in the middle of the first decade of the twenty-first century, and this process crossed different governments, prime ministers and parties without losing momentum.

This process of managerializaton and marketization of the public sector was particularly intense for the United Kingdom, which was considered a “poster-child nation” for neo-managerialist policies in the eighties and nineties. The government of Margaret Thatcher had opened up the season of administrative reforms introducing scrutinies to reduce waste in the public sector, creating different programmes to improve efficiency in the civil service, contracting-out public services and setting up executive agencies to give more autonomy to public executives to manage the policy-implementation process. These reforms were implemented and strengthened during the nineties when the concept of “consumerism” was introduced in the public sector and public service delivery. This approach persisted in the 2000s when New Labour governments added to managerialist  and marketization policies an effort to improve coordination at governmental level and to better address social issues.

In terms of methodology, the book has a very strong historical background (which makes it different from the existing literature), but it uses some concepts of political science as tools to develop historical analysis, such as path dependency. Furthermore, particular attention is devoted to British administrative traditions, looking at them in relation to the reforms of the 1980s, 1990s and 2000s. Indeed, the aim of this research is to explain the dynamic of institutional development of the Civil Service from the Thatcher to the Blair Governments, giving an account of continuity in administrative traditions and managerial changes of central government bureaucracy through the use of legal, public and archive sources.

The central argument of the book, at methodological level, is that while there have been a number of periods in the last fifty years in which the British Civil Service has undergone a process of reform (most notably the 1968 Fulton Report and from the 1980s onward), the nature of change has been evolutionary rather than revolutionary. Even when the parties have been elected on a radical platform—as was the Thatcher Government in 1979 and Blair in 1997—their period in office has been marked by an unwillingness to provide a new constitutional settlement that would fundamentally transform the foundations on which both the Civil Service and the state are legitimised. It is therefore argued here that although in those years the British Civil Service has undergone structural, cultural and personnel reforms similar to those experienced by other liberal–democratic states, the reform process itself has always been constrained by the continued maintenance of constitutional conventions and administrative traditions that define Britain’s institutional arrangements.

Indeed, analysis of the historical facts shows that many changes occurred in the organisation of the Civil Service, the process of managerialisation was settled and implemented and structure was reformed, the relationship between ministers and civil servants changed progressively, but the traditional principles of the Civil Service, such as access by open competition, meritocratic careers, permanency, neutrality, integrity, impartiality, centralisation and institutional self-government, mostly persist. Despite consistent structural reforms, the constitutional framework did not change fundamentally.

For these reasons administrative history remains an important guide to interpret recent administrative reforms. The history of the Civil Service’s “managerialisation,” in its various forms, and the new institutional arrangement that arose in the period considered have not replaced the Westminster system central operating code. Rather they have been grafted on, and managerialism and Civil Service traditions developed side by side.

During these three decades of reforms, the concepts of “management” and “bureaucracy” had been fused together, without losing their own significance and balancing innovation and tradition, and this dynamic originated a new phase of the British history of government.

As the political scientist Guy Peters notes, “There will be change and evolution, but the range of possibilities for that development will have been constrained by the formative period of the institution.” Thus, even when reform of Whitehall has occurred, the impact of change has been evolutionary rather than radical. This leads to the conclusion that the reform of bureaucracy in Britain provides a convincing example of institutional path dependency. As a leading constitutional historian, Geoffrey Elton once wrote “True administrative revolutions are rare.” They took place, he said, “only when the State itself is being refashioned fundamentally.” Otherwise, public administration “usually develops by slow degrees”. Indeed, as this work attempts to demonstrate, the soundness of administrative traditions has turned out to be more resilient than political discourse.

Lorenzo Castellani is Postdoc research fellow at LUISS Guido Carli University of Rome where he teaches History of Political Institutions. He obtained his PhD in Political History from IMT Institute for Advanced Studies Lucca in 2016 and he was research associate at King's College London in 2014/2015. His main research topics are contemporary history of civil service and history of political institutions. In 2018 he published The Rise of Managerial Bureaucracy: Reforming the British Civil Service (Palgrave MacMillan). 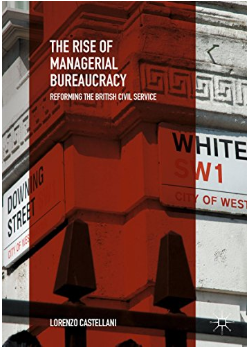