The Politics of Expertise - How NGOs Shaped Modern Britain

It is often argued that citizens in modern democratic societies are less likely to engage socially and politically than previous generations. Distracted by the pleasures of consumer capitalism, they are less interested in joining clubs and associations and remain sceptical of the efficacy of politicians and the political process. But the evidence is inconclusive.

There have been downward trends in voter turnout and in membership of key civil society groups, such as trade unions. But there has also been growing interest in single issue politics – for example, the environment, human rights, humanitarianism, and sexual and identity politics. While membership of political parties has fallen, non-governmental organisations (NGOs), charities and voluntary organisations have all grown into enormous entities. As a sector, charities such as Oxfam, Greenpeace and Friends of the Earth, have a combined income approaching £50 billion a year and employ hundreds of thousands of people around the world. The public contributes its time and money to these organisations, suggesting a widespread desire to influence policy through mechanisms other than those associated with the traditional channels of Westminster and Whitehall.

It is these contrasting trends in civic and political participation that we wanted to understand in The Politics of Expertise. In many ways, the interests of our students encouraged us to conduct further research on the matter. While they were turning away from the established social history courses on class politics, newer subjects on popular culture were not satisfying everybody. The speed with which students signed up for classes on new social movements, on histories of various forms of protest or on issues related to contemporary globalisation was remarkable. We knew there was a shifting student demand that perhaps offered a way in to other debates about social and political participation.

It was not always easy to teach these subjects, especially for post-1960s Britain. Students were well aware of the major charities, NGOs and voluntary organisations, but the secondary literature remained limited. In part, this was because the archives of such organisations had not been opened up to researchers, although a new generation of historians was waiting, clamouring to get in. The first thing we did, therefore, was to secure external funding to locate, describe and, in some cases, preserve the archives of groups such as Save the Children, Relate, Liberty and Amnesty. There are now nearly 2,000 organisations listed in our Database of Non-Governmental Organisations (DANGO: www.dango.bham.ac.uk) and we hope we have helped many graduate students find a viable subject for their PhD.

With further funding from the Leverhulme Trust we could set about mapping the sector since 1945. We wanted to demonstrate the significance of modern NGO, a phenomenon overlooked by other historians, and to trigger more research. We began collecting data on over 60 NGOs, measuring their income, memberships, their presence in the media and their types of engagement with the public and the policy process. The resulting book, A Historical Guide to NGOs in Britain, provides overviews of the histories of leading NGOs as well as of key sectors and issues. We made the raw data in this volume freely available online: www.ngo.bham.ac.uk

We examined three sectors of NGO activity – environmentalism, humanitarian aid and development, and homelessness – to explore why the public has supported these new political actors, how influential they had been and what impact they have had on both mainstream politics and the ways in which ordinary citizens engage with the world. We found that there has been both a privatisation and a professionalization of politics in modern and contemporary Britain. As skilful navigators of the modern technocratic state, NGOs have developed expert knowledge about a range of issues in order to tackle the expertise employed by the state and the private sector. In so doing, they have changed the nature of grassroots activism. As affluent citizens have felt marginalised by the increasingly complex nature of many policy solutions, they have made the rational calculation to support NGOs, the professionalism and resources of which make them better able to tackle complex problems.

Consequently, support rather than participation becomes the more appropriate way to describe the relationship of the public to NGOs. As voter turnout has declined, membership and trust in NGOs has increased. But NGOs are very different types of organisations from the democratic institutions of political parties and the labour movement. They maintain different and varied relationships with the publics they seek to represent. Attracting mass support has provided them with the resources and the legitimacy to speak to power on a wide range of issues, yet perhaps the ultimate beneficiaries of this new form of politics are the NGOs themselves.

These processes are only set to continue. The development of digital technologies, online forms of protest and the new appeals to ordinary citizens facilitated by various and ever-evolving forms of social media, will ensure that NGOs remain key mobilisers of public opinion. This is a rapidly changing landscape that has seen the rise of new, less formal, protest groups, but NGOs too have proved adaptable to the new forms of giving: witness the ever increasing resources directed towards the humanitarian sector, for instance.

The principal policy implications of these findings are threefold. Firstly, the evolving relationship between the public and politics is mediated in ever-changing ways by NGOs. As such, there has never been any fixed relationship between society and politics which is then open to manipulation and control. In particular, any policy interventions based on set assumptions about the state of civil society or its ideal forms often fail as they lag behind the pace of change within the sector. Too often, such assumptions miss the countless other ways in which citizens seek out new methods to influence society. Evolution not stagnation is perhaps the key feature of democratic participation and any politician or utopian must always bear this in mind.

Secondly, while NGOs have become key players in the policy process they do not offer an alternative to mainstream politics, nor have they unlocked the key to successful political intervention. While examples of NGO success in influencing legislation are legion and they can learn from the tactics of past campaigns, these lessons cannot that guarantee success in the future. Rather, NGOs and their supporters rely upon a toolbox to effect policy change, picking suitable instruments for each occasion. If there is a constant factor in an effective campaign, it is hard work.

Thirdly, the practical work undertaken by NGOs and charities has not made them an alternative to the state. They are not a replacement for the retreating public sector. Indeed, NGOs have become embedded in the modern state, not least because of state funding of their activities, but also because of the blurred boundaries of expertise, personnel and spheres of action. The public might well have turned to NGOs to reflect their interests and values, but NGOs have in turn shaped and influenced how we think as citizens. They have responded to our concerns and interests, but have been important mobilisers of those opinions. In turn, they have lobbied on our half on a range of specific issues and have achieved many successes. However, the ways to victory have never been guaranteed and there are limits to the effectiveness of NGOs as political players that only serves to confirm the continued relevance of traditional ways of doing politics. Ultimately the winners in the rise to prominence of NGOs are neither the public nor democratic politics. It is the NGOs themselves, as their very size and continued expansion attests.

We are fully aware that The Politics of Expertise offers no definitive answers to these questions and we have only scratched the surface of the varied forms and expansion of political interaction and participation over the last century. We are under no illusions that there are limits to the potential of NGOs. Just ask James McKay. At the end of this project he turned his back on what could have been a distinguished career in academia and eschewed the types of politics we uncovered. Today he is a Cabinet member of Birmingham City Council. 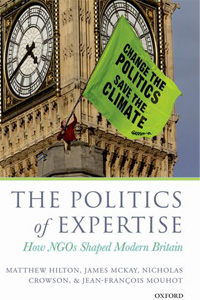