The Cycling City: Bicycles and Urban America in the 1890s

There’s a buzz about bicycles!  The number of cyclists is increasing, the streets themselves are changing in order to cater to them, and politicians can’t stop talking about them:  Is it 1897 or 2016?

I wrote The Cycling City, a book about the great bicycle boom of the 1890s, while living in the midst of our latest bicycle renaissance.  As I read about the brand new bicycle paths and bike lanes that dotted late-nineteenth-century cities and the imaginative plans for crisscrossing bicycle interstates and elevated bicycle highways, I saw Michael Bloomberg and Janet Sadik-Kahn’s vision of a twenty-first-century cycling city take shape.  As I read about leaders of the local cycling clubs in the 1890s who demanded that cobblestones and mud be turned into asphalt, that traffic patterns and laws be altered, and that horse drivers and streetcar operators learn to share the road, I watched cities across the globe float, implement or reject congestion pricing schemes, bike sharing programs, and cycling-friendly traffic laws.  Today, world leaders and local politicians are photographed on two wheels and campaign on the promise of building new and improved cyclescapes; back then, big city mayors hopped on their bikes and cycled as far as they could to impress the all important bicycle vote.

Since the democratisation of cycling in the late nineteenth century, the bicycle has changed remarkably little.  Yes, bikes today can feature frames made of carbon fiber, have dozens of gears that shift seamlessly, and accessories of endless variety, but the basic shape and the basic functionality is, more or less, the same.  Yet its perceived usefulness has changed from decade to decade, city to city.  The value of the bike is not fixed, but rather variably defined by people across space, time, and culture.  In cities like London and New York, city dwellers in the early twenty-first century have imbued bicycles with meaning that, in certain ways, parallels the ways in which advocates in those same cities in the late nineteenth century did.  Bicycles feature in the upcoming Mayoral election in London, as they did in the 2013 New York Mayoral elections, and as they did in similar contests during the 1890s.

Most interestingly, the debates about cycling have come, gone, and arrived again.  Where should bicycles be ridden?  How should bicycles be regulated?  How can cities promote cycling?  Who is and who isn’t a real cyclist?  Although the questions are largely the same as they were 120 years ago, there is no sense – unfortunately - that some of the answers can be found in history.

Of course, times have changed.  In the 1890s, whilst cyclists had plenty to complain about, automobiles had not yet made the list.  And the newness of the bicycle (earlier versions had existed for some time, but the modern bicycle was first popularized in the late nineteenth century) invited much optimism about its future and its ability to reorder urban life and the cities themselves.  In some ways, though, today’s cities seem better suited.  Bicycles are much less expensive today, cities are generally more dense, the roads are smoother, and although people living in the 1890s had legitimate concerns about their health and the environment, today the majority of people know about the problems of climate change, pollution, etc.

What followed was a vacuum.  The existing infrastructure began to crumble and the imaginative blueprints for cycling cities of the future remained just plans sitting on the table.  Advocates lobbying for friendlier laws and cycling amenities disappeared from the political discourse.  The subsequent bicycle booms, then, have had to start largely from a blank slate, at least in the US.  There was no sense of history.

The story unfolded quite differently elsewhere around the world.  Most famously, later in the twentieth century, the Netherlands became the model of institutionalising cycling into the state.  Infrastructure was built.  The cyclists came.  The cyclists stayed.  In several Asian countries, bicycle ridership increased as well and, until recently, became a critical part of the transportation network.

The story of cycling in the city is a winding one. There have been golden ages and crashes, booms and busts, steady climbs and slow declines.  At various points across time, London, Paris, New York, Amsterdam, Copenhagen, Shanghai, and a host of other cities could reasonably claim to be the epicenter of the cycling world.  Many of these examples make clear that government plays an instrumental role in welcoming or discouraging cyclists.  Traffic laws that promote cycling and limit automobiles (or streetcars and carriages in the period in which I study) and infrastructure that invites cyclists to comfortably ride and park their wheels are incredibly important.  A political culture in which government invests in and promotes the bicycle is clearly a critical component of the long-term sustainability of cycling.  Just as, if not more, important, is the sociocultural mood of a given place.  As the case of the US makes clear, policy helped the cycling city take shape and it was policy, or the lack thereof, that made it so hard for bicycles to ever come back.  But cyclists started and stopped riding bikes not because the streets, public transportation options, or the rules of the road changed so suddenly in one direction or another; instead, the bicycle simply fell out of favor.

In the US at least, policymakers remain largely in the dark when it comes to cycling history.  They assume that cycling simply is not, and has never been, part of American culture.  They are planning for a future in which the bicycle plays a more critical role in urban development, but a role that is circumscribed by the belief that the bicycle will never be more than a bit player.  After all, the real cycling cities live only in Western Europe, so they think.  But in the 1890s, the Cycling City was the American City.  And policymakers today ought to take a ride back in time. 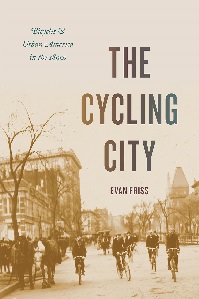