The British People and the League of Nations: Democracy, citizenship and internationalism, c.1918-1945

Governments in democracies share a common problem: how much information about the formulation of policy should they share with their citizens? In recent decades, and under the influence of Freedom of Information regimes, the pendulum has swung decisively towards openness wherever possible, on the grounds that tax-payers and citizens have the right to know how decisions affecting their everyday lives are arrived at in centres of institutional power.

Foreign policy, as opposed to domestic affairs, has historically posed a much thornier problem for politicians and officials keen to promote transparency and accountability at the heart of government. As Harold Nicolson - diplomat, MP and diarist - argued eighty years ago, foreign policy should ‘never be secret’ once it has been determined, but the process by which that policy is made must always be secret if it is to have any chance of success. As the political fall-out over the publication of thousands of classified US embassy cables by WikiLeaks in 2010 reminds us, even governments with the strongest of democratic traditions often prefer to keep the details of diplomatic negotiations under wraps for fear of endangering national interests.

This problem – how to balance the imperatives of foreign policy with those of democracy – lies at the heart of my new book, The British People and the League of Nations. Although English radicals had railed against ‘secret diplomacy’ and ‘aristocratic monopoly’ since at least the late-eighteenth century, it was between the World Wars that the debate about foreign policy and popular government gained critical political traction. Following the world’s first ‘total’ war, in which millions of men were sent to their deaths on the say-so of a handful of statesmen and generals, many in Britain began to argue for an entirely new approach to foreign policy-making, that would privilege openness and accountability, and be driven by the public will. As old empires tumbled to be replaced by liberal constitutions and mass electorates, now seemed to be the moment for foreign policy to be ‘democratised’ once and for all.

As I argue in my book, much of this progressive sentiment took as its lodestar the League of Nations, which was created by the victorious Allies at the Paris Peace Conference in 1919 as a mechanism for the peaceful resolution of disputes between nations and to promote more generally international cooperation and friendship. The League, at least in its ideal form, was founded on transparency and openness. Its legitimacy rested on the support of global public opinion, which represented a ghost in the machine, empowering the statesmen who attended the League’s annual assemblies and council meetings to take bold steps towards ever closer cooperation. I explore the scale, scope and foundations of this pro-League public opinion in Britain through the story of one of the largest voluntary associations of the era, the League of Nations Union (LNU).

Broad-based, non-party and non-sectarian, the LNU established itself at the heart of British associational life between the wars. As a mass-membership organisation which sought to educate the public through meetings, study circles, processions, pageants, pamphlets, periodicals, sermons, short stories, posters, cartoons, books and broadcasts, the LNU seemed to embody the progressive commitment to bringing foreign affairs within the purview of all citizens regardless of class, gender or religion. At its peak, the LNU achieved impressive results, with over 3000 branches and more than one million people paying a subscription at some point between the wars. The LNU encouraged other organisations to affiliate, so that by the early 1930s the League movement encompassed a healthy cross-section of civil society, stretching from trade unions and Women’s Institutes to church congregations and public schools. This feat was achieved largely through the ability of League supporters to yoke their message about internationalism to a wider set of social, political and spiritual agendas. International cooperation met the needs of educationists, feminists, imperial reformers and ‘modernisers’ within the Christian churches, as well as countless millions who simply wished to 'do something' to prevent the outbreak of another world war. It was because such a broad consensus had coalesced around the League idea that the LNU was able to persuade almost 12 million Britons (over one third of the adult population) to vote in its Peace Ballot of 1934-5, which sought to test public opinion on Britain’s current and future international obligations.

Ultimately, however, my conclusions offer a warning to present-day advocates of a ‘democratised’ foreign policy. Although the LNU and its supporters undoubtedly helped to create a mass electorate more informed about foreign affairs, it did not achieve its aims of placing public opinion in the driving seat of foreign policy. In part this was due to the hostility of the Conservative, or Conservative-dominated, governments of the day, together with the deteriorating international scene in the later 1930s as fascism overtook large swathes of Europe.

But it was also due to the sheer complexities of the foreign policymaking process – complexities few ordinary Britons could hope to grasp, even if they spent all their free time studying newspapers and attending improving lectures hosted by the LNU. Most British people then (as now) were largely content to delegate responsibility for the setting of policy to those either elected to, or specially trained for, the job. Foreign policy, as one former editor of the New Statesmen noted in 1931, posed a particularly acute challenge to the voter who wished to make up his or her own mind, as it usually lay far outside one’s everyday experience, which was not the case with schools, hospitals or welfare, on which where everyone had an opinion.

This disconnect between ideals and realities continues to exist in contemporary democracies. Even with rolling news, embedded journalists, and real-time information fed through Twitter and Facebook, we can’t all be foreign policy experts. How many of us read even a fraction of those leaked US cables? The experience of the LNU between the wars reveals how much a mass-membership association can achieve in informing, engaging and – at particular moments in time – mobilising public opinion on foreign policy matters. But it is also a sobering reminder of the limitations of public activism in this policy sphere, exemplified in February 2003 when an estimated six to ten million people across sixty countries marched in protest against going to war with Iraq, to no avail. The LNU failed to crack the nut of how to fashion a democratic foreign policy between the wars. It remains to be seen whether the twenty-first century will provide any more convincing solutions. 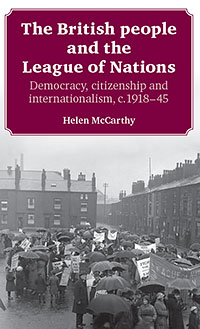