The Big Society Debate: a New Agenda for Social Welfare?

'The Big Society' is the government's 'big idea', as the Prime Minister, David Cameron has repeatedly stated, suggesting that it is a solution to our 'broken society' and an important new direction in social welfare provision, which will liberate society from 'Big Government' and release the dynamic energies of volunteers and local communities.

As an apparently dramatic and inevitably contentious government intervention into a core area of social policy, it seemed to History & Policy to be of crucial importance that public debate on such an important matter should be as fully informed as possible by history. 'Big society' is a historical concept, but this is not always apparent to policy makers and shapers. As the government's policy inevitably draws on institutions and activities with a long history in British society, the historical dimensions of such a policy are critical to explore.

Naturally, historians were not alone in their thinking or concerns about 'the Big Society.' This publication, which I edited with Armine Ishkanian, of LSE, was also informed by the H&P seminars in the Cabinet Office and Office for Civil Society, which brought historians and civil servants together to discuss the history relevant to 'the Big Society' agenda. Recognising the benefits of a multidisciplinary approach, social policy scholars, civil society practitioners and historians also came together at a workshop at LSE which formed the basis for The Big Society Debate: a New Agenda for Social Welfare (Edward Elgar 2012). With limited space I focus here mainly on the historians' contributions in Part I of the book but would urge readers to consult the many important chapters in Part II.

There is a long transatlantic intellectual history of ideas, akin to 'the Big Society', stretching back at least to Adam Smith. Smith explored the dilemma of how, in a liberal society with a market economy, the art of statecraft can breed a society of benevolent, not merely self-serving, individuals. And, conversely, how do we ensure that a state committed to benevolent social and economic policies does not trample on individual freedom and personal initiative? The long history of welfare provision in England since Elizabeth I offers examples of institutions enabling civic and voluntary activity that help answer Smith's dilemma.

During the seventeenth and eighteenth centuries England and Wales became the epicentre of a global, dynamic market economy while simultaneously providing its populace with a universal but highly devolved social security system, the Elizabethan Poor Law (dating from 1601), which was funded by a progressive property tax. Complementing this system of vigorous and accountable local (parish) government was the Elizabethan statute of Charity Law, also of 1601, which set out how the nation's elite might choose to support the poor voluntarily by, for instance, founding schools for poor scholars, building almshouses for the elderly and the ill, or funding apprenticeships for orphans. Not only were these charitable acts effective in alleviating the plight of the poor, but they also served to defray the costs of the Poor Law on the elite class, and brought them and their heirs kudos and gratitude from the local community. Hence the Elizabethan state had ingeniously created an incentive structure which, while imposing unavoidable benevolence through the tax-funded Poor Law, simultaneously encouraged personal, voluntary initiative through its accompanying charity statute. Vigorous, accountable local government, fully fiscally supported by the wealthy, was key.

Is today's wealthy elite really obligated to pay their fair share, either to the common-wealth or to their local communities, or is it easy for them to avoid or evade? Can 'Big Society' charity and volunteering flourish when the incentive structure for the elite to truly engage is so weak? This seems a vital lesson of history.

One of the problems 'the Big Society' attempts to fix is Britain's alleged 'broken society', which, among other issues, implies the diagnosis of decline in voluntary activity and civic engagement. Historical research, by Matthew Hilton and colleagues, shows this claim is highly misleading. Registered charities doubled to 180,000 and volunteering has risen over the last 40 years. There has been change in citizens' engagement with charities but this in fact reflects rational disenchantment with national politicians and parties. Citizens increasingly trust and support - often virtually - professionalised NGOs to pursue their political ideals, since they perceive elected governments are too close to powerful economic interests.

Similarly a good example of face-to-face activism is Hackney Unites, an anti-racist community campaign, which built on its success to embrace mutual support work that includes 40 local associations. Is this what David Cameron has in mind when he speaks of 'the Big Society'? Meanwhile Kate Bradley's research suggests that new, centrally-driven initiatives of 'the Big Society', such as the National Citizen Service, rather than engaging constructively with the century-old local youth services, are expanding at their expense. In the Prime Minister's constituency long-established and cherished youth clubs face terminal funding cuts.

The experience of editing this book led me to four overarching conclusions. First, that volunteering and civic action cannot be turned on like a tap. Second, if market mechanisms and models are introduced further into social welfare provision, this may damage the capacity of the voluntary sector. Third, volunteering cannot make up for reduced public services; though they exist in varying relationships in different countries they are symbiotic and complementary. When a charity manned by volunteers fails to deliver the quality or quantity of service it promises to an individual, there is no effective legal recourse - the charity's workers are volunteers. That is why well-funded and managed statutory public services are essential for the provision of social security, health and education for society's poor and disadvantaged individuals. Armine Ishkanian's chapter emphasises how the poor - and women in particular - have repeatedly suffered when public services have been withdrawn on the neo-liberal supposition that this will release the energies of the private and voluntary sectors.

Fourth and finally, to achieve the Smithian balance of benevolence and freedom is an ultimate aim of good government. But in Adam Smith's terms, the research of social policy scholars and historians in this book indicates that 'Big Society' policies are ephemeral. The creation of the right fiscal and legal incentive structure for civic benevolence can only come from the legislature. It has to find ways to tie-in the energies and resources of the rich and powerful with vigorous, accountable (to ordinary people) local government. Paying no attention to these historic lessons, 'the Big Society', in association with the austerity strategy, threatens to damage, not enhance existing civic and voluntary activity. 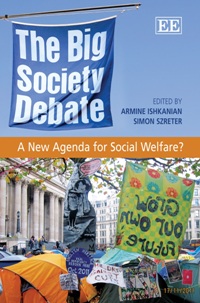