This is the first time that the recent history of unmarried mothers in England has been told comprehensively. These are the stories of women whose lives have often been hidden and unfairly stigmatised. Sinners? Scroungers? Saints? Unmarried motherhood in twentieth century England also corrects inaccurate assumptions about family history, which persist in present-day policy and media discussion and can result in policymaking for the present, based on a poor understanding of the past.

It is time to abandon the myth that unmarried mothers were a creation of the 'permissive' 1960s. They were not. And the myth that previously, all unmarried mothers were impoverished and ostracised. Many were, but by no means all. And the myth that voluntary action was 'crowded out' by the welfare state after the Second World War. This was certainly not the case for the National Council for the Unmarried Mother and her Child, as the current vitality of its successor, Gingerbread, clearly demonstrates.

In reality, unmarried mothers came from every kind of social background and had diverse experiences. Some were isolated, impoverished and forced to feel they had no alternative to adoption. Others lived stably, and secretly cohabiting with the father. Some were supported by an absent father, or lived with supportive parents, often secretively, with the child growing-up believing that their grandparents were parents and their mother, a sister. The National Council gave women vital support, in the world before the welfare state, to keep their child, survive, find a home and work.

They were surprisingly often accepted, though still in secrecy and silence, by friends and neighbours who recognised that decent women made mistakes, or were misled by a man's promise of marriage. Before the Second World War, as many as 30 per cent of first children born to married couples were conceived before marriage. Some relationships didn't make it to the altar. Premarital sex was not invented in the 1960s.

Much did change from the 1960s. The population of single mothers grew, as separation, divorce and open cohabitation became commonplace. The culture of secrecy and silence around sex outside marriage dwindled. The welfare state gave single mothers and their children basic, though never generous, support. The National Council (from 1973 the National Council for One Parent Families) helped mothers negotiate the welfare system, find homes, child care and the training and work most of them wanted, and many got: as nurses, teachers, secretaries, shop-workers, civil servants. It was part of our long-established 'Big Society' of voluntary agencies, collaborating with and complementing the Big Welfare State, not crowded out by it as politicians sometimes suggest.

Something that didn't change was the National Council's need to protect single mothers from labelling and blame, which grew in some quarters rather than diminished - presented as feckless Vicky Pollards, teenagers getting pregnant for the sake of a council flat (a claim endlessly disproved by research), rearing rioting educational drop-outs (equally disproven: the children of poor single parents fare little worse than the children of poor married parents) - held responsible for all the ills of supposedly 'broken Britain'. Such moral panics recurred throughout the century, always at odds with the reality of most single mothers struggling through hard times to raise fine children. 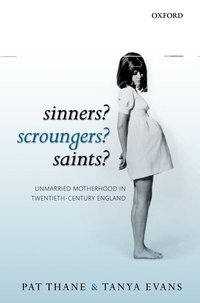