Registration and Recognition. Documenting the Person in World History

The right to registration is enshrined in Article 7 of the 1989 UN Rights of the Child, yet not much more than half of the world’s population is registered at birth today. In a juridical sense these individuals barely exist in the purview of their states, a fundamental form of disability. With the rapid advent during the last decade of new, IT-based and biometric systems of identity registration promoted by various trans-national commercial organisations some national governments are at last moving to address something the WHO has termed a ‘scandal of invisibility’. For instance, India’s ambitious new unique identification card system. At the same time there is a national security as well as social security motivation for states to invest in the latest biometric technology.

There is, thus, a critical international policy conjunction today between historic deficits in registration and new technologies promising fixes. Is this likely to be empowering or disempowering for today’s citizenries? On the basis of our quite distinct historical research projects on South Africa and Britain, Keith Breckenridge and I had each realised when we first met a few years ago that, unlike the history of census-taking, there was startlingly little detailed knowledge about such identity registration systems in the past. With new and changing registration systems now being promulgated around the world, there is therefore some urgency to supplement our historical knowledge of census enumerations with a complementary understanding of the distinct comparative history of identity registration systems. We therefore convened an international conference attended by about two dozen colleagues who responded to the call to present a range of highly original and innovative studies on the comparative history of identity registration systems from around the world. Some delved deep into the classical past of Europe and Asia; several have looked carefully at the early modern era in Europe, the Americas and Asia; while many others explored registration systems in nineteenth and twentieth-century Africa.

As usual when there is a shortage of researched history, this has meant there have been some insidious and powerful- but essentially untested- assumptions, which Keith and I had certainly each found to be uncorroborated by our own researches on early modern British and on late nineteenth and twentieth-century South African history. For instance it has been assumed that European nineteenth-century bureaucratic nation states have been the principal creators of the world’s population information systems disseminating them through global imperialism. While this has been shown to be broadly true in relation to the history of the census, it turns out to be an inaccurate presumption where registration history is concerned. For instance new chapters in this volume demonstrate practices of registration outside Europe and also long before the modern era in Athens and Rome, and in China and Japan.

There is also a very well-developed literature among historians which tends to equate all such officially-sanctioned information systems with the growing capacity of the modern, bureaucratic central state to collect the knowledge it wants about us, the citizens, arguing that ultimately this is all about official ‘disciplining’ and attempts to control us. From this point of view the current expansion of registration looks like a bleak prospect. Keith had found, however, that despite its gargantuan appetite for creating information systems to monitor and police the apartheid system of racial segregation, in fact the South African state throughout the twentieth century retained only a superficial and weak control because of its failures to manage its own mountain of documentation. Meanwhile I had found, by contrast, that although local parish registration was probably instituted in post-Reformation England partly as an ingenious scheme to marginalise the property rights of nonconformists, it came to flourish as an empowering system of legal record for all subjects, including their absolute rights in a parish-based social security system precociously created by Elizabeth I at the end of the 16th century.

Indeed, in the English case the early modern combination of identity registration and parish social security systems seems to have been synergistic, empowering and favourable for economic development in the world’s first industrialising nation. This and new research in the volume has also shown not only that identity registration systems were far from exclusively modern creations but additionally that they could be more efficient when organised by communities and networks, not central bureaucracies. Nor did registration systems necessarily dis-empower citizens; indeed, under some circumstances apparently they could be significantly legally empowering and economically virtuous. All of these points were found to be fully illustrated also in the early modern history of the other most commercially advanced society in Europe, Holland, where a multiplicity of registration systems existed among the many denominational communities of Amsterdam and also its guilds and trading companies.

So perhaps the most important general policy conclusion to be sustained by this book is the point that identity registration systems are neither intrinsically disempowering nor empowering. They can be extremely important facilitators of commercial and economic development through enhancing citizens’ security and capacities to conduct business with their legal personhoods securely recognised. On this basis such individuals can participate in and build a vigorous civil society, something which registration was explicitly intended to achieve in Ottoman Egypt, for instance, and which Paul-Andre Rosental depicts occurring in nineteenth-century France. This is not to deny, however, that such systems can also be abused when state power runs amok as in Holland under Nazi occupation when population registers were tragically used to round-up Jews. However, identity registration systems are potentially a source of citizen empowerment, not solely of disempowerment.

One of the many further policy-relevant conclusions to emerge from the volume is that since registration is an act conferring public recognition of legal personhood and status, it is a process in which the aims and interests of the person being registered may play a significant role. Individuals are not necessarily passive. They frequently find and exploit flexibilities within official systems to negotiate and mould the claims to identity that they want. If anything, as Shane Doyle shows in Uganda, Andrew Macdonald in South Africa and Tamar Herzog in early modern Spain and Spanish America, paper-based systems have increased, not reduced the scope for such ingenuity. Furthermore, while registration systems can be created initially for repressive reasons, nevertheless they can later come to be used and valued for empowering reasons, as in early modern England. Similarly South Africa’s recent Child Support Grant and pensions distribution systems were able to be rapidly deployed by piggy-backing on the late-Apartheid era registration system.

While three of the four parts of Registration and Recognition are devoted to presenting ‘blue skies’ new research on diverse identity registration systems across many centuries of world history, the fourth part contains chapters more explicitly addressed to contemporary policy issues. One of the oddities of the early UN-sponsored Human Rights declarations after World War II was their initial omission of attention to this practical issue of registration of individuals’ identities and legal existence. In twentieth-century Latin America, USA and in Africa it is shown that policy attention to the importance of universal identity registration has come in each case through appreciation of its importance for ensuring the health and welfare of children. This strongly suggests as a general policy conclusion- and as the contemporary work of both UNESCO and Plan International illustrate today- that the establishment of genuinely effective and universal legal identity registration systems for the world’s adults in the many poor societies still lacking such systems may emerge on the back of concerns for the welfare of these countries’ children, rather than, for instance, simply through a democratic concern to enrol all voters. The new Indian Republic rapidly created an electoral roll but not until 60 year later, with the launch of the Unique ID programme, has this translated into a universal identity registration system for many of its children- the poorest citizens of the subcontinent. 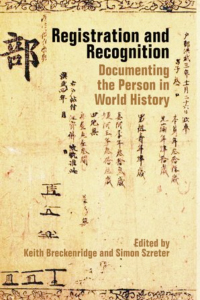