How have attitudes towards pre-school childcare changed and what can the history of childcare tell us about what is needed now? In Pre-school childcare in England, 1939–2010 I have investigated how competing ideas about the physical and mental wellbeing of young children influenced the provision, practice and experience of childcare outside the home in between 1939 and 2010. Childcare always seems to be a controversial subject and one that remains in the public eye. In the book I explore the relationship between current perspectives and past attitudes; and consider how uncovering the history of childcare might help those working determining and delivering childcare policy today.

In the 1950s and 1960s the question of how to care for the under-fives was seemed uncontroversial to many people because it was assumed that they would be best off at home with mother. Yet, when I probed beneath this assumption, it became clear that the issue was in fact one of intense debate. Arguments against childcare outside the home centred on the fear that separating infants from their mothers caused emotional harm, whilst its proponents believed it provided children with opportunities for physical, cognitive and social development. Moreover, even if most people agreed that very young children should be at home with mother, until what age this should be was not as clear; was it two, three or five? And then when they reached this age where and by whom should they be looked after – in a day nursery, nursery school or class, by a childminder or in a playgroup? Should care or education be the main goal of such services? What about children who could not be looked after by their mothers, those children whose home conditions meant that their health would benefit from time spent outside it, or the only child who lacked the company of other children? And casting a shadow over all of these debates was the rising rate of female employment. What should be done about the children of working mothers?

There were no simple answers to any of these questions. Between the late 1930s and 1990s childcare was a politically charged subject and debated at length among and between the major political parties, the trade union movement, other professional associations and the voluntary sector. It was taken up by the feminist movement as a major campaigning issue. And, of course, it has been picked up by the media – often surrounding moments of moral panic in relation to perceived scandals. However, despite the fevered debates on the subject and the social and political dynamism of these decades, there was little change in the level of state-provided pre-school childcare. The similarities in attitude of successive governments during the second half of the twentieth century, despite the different party in power, are noteworthy.

In the book I argue there were three main ideas about childcare that dominated government action (or inaction) until the end of the century. First, care for the under-fives was the responsibility of individual families, not the state.  Second, young children were best off at home with their mothers. Third, any care that was offered to the under-fives should be cost effective. A combination of factors – the dominance of psychology and psychological medicine in Britain in the second half of the century, the traditional reluctance of the state to get involved in private family matters and the low priority afforded to financing childcare during periods of economic recession – all contributed to the low level of pre-school childcare available in comparison to other European countries.

My aim in the book was to do more than to discover the reasons for the low provision of care in England, however. I also wanted to consider the effects of the contemporary views of childcare on those involved, whether as mothers who sent their children to childcare, the children themselves, now adults, and those who provided childcare. I interviewed 50 people about their experiences of pre-school childcare between 1939 and 2010.

What did my research reveal? Among those who worked with children, I found that most strongly believed in the importance of the mother-child relationship and this shaped their attitudes towards their working practices. The importance placed on attachment theory (which originated with the seminal work of the psychologist John Bowlby (1907-1990) who believed children’s earliest bonds with their caregivers influence them throughout their lives) during their training influenced them throughout their working lives, thereby accounting for the long legacy of this theory. Moreover, the belief that infants needed their mothers was also widespread within popular culture. Many of the mothers I interviewed also expressed the belief that their young children would have been best off cared for by them and often expressed guilt and regret if they had not done so.

However the recollections of adults who had attended childcare offer an interesting perspective and a more nuanced picture. While some also felt that they had suffered because they were not looked after by their mothers, and indicated that they felt young children were best off being cared for by a parent at home, the overall picture that emerged was that those who came from happy stable family backgrounds seemed to remember their childcare more positively and those who came from unstable families less so. Their experiences suggest that it was not the childcare they attended but their existing family relationships that were all important in determining their experiences. My findings in the book therefore indicate that attending even good quality childcare will not alone militate against the effects of deprivation and disadvantage and that early intervention working with parents as well as children will have the best long-term outcomes. Hence the proposed increased in the number of free childcare hours for three and four year olds needs to take place in tandem with continued support for families in the form of schemes such as Sure Start or the Troubled Families programme. 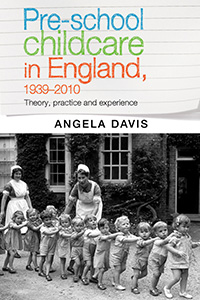