Hyperactive: the controversial history of ADHD

Most academic books have an elephantine gestation. An idea forms, research follows, perhaps sporadically over Christmas breaks and summer holidays, and then you begin the alternatively flattering and soul-shattering experience of soliciting your precious idea to a publisher in the hopes of getting a contract. That being achieved, and almost as an afterthought, writing begins, sometimes fluidly, sometimes tortuously, sometimes not at all. Then, after deadlines, reviews, more deadlines, filling out marketing questionnaires, edits, proofs, indexing, and, in my case, some humming and hawing over what to call the blessed thing, the book is published. It can be such a convoluted process that you almost forget why you thought about writing it in the first place. But that's not the case for this book. I know exactly where I was when I decided to write a book on the history of hyperactivity.

It was December 2001 and I was in my MA supervisor's office, discussing my first three months' research. My project was on the history of science and religion, focusing on the Boyle Lectures, a perfectly good and eternally relevant topic, but it is safe to say that my progress had been, well, middling. I liked the topic - and still do - but I was out of my depth. My background in early modern history was shaky, I wasn't particularly strong on either science or religion and my Latin was abysmal. The fact that I began my degree on 11 September 2001 hadn't helped the mood. Ironically, the only other place I had been accepted for an MA was Dalhousie University in Halifax; my topic: 'Breakdowns in Post-War American Intelligence'!

So, there I was, listening to my supervisor's eminently sensible advice on how to proceed, when I blurted out something about changing my topic to the history of hyperactivity. She looked at me quizzically, but also with intense interest. I explained that before returning to university, I had been a counsellor and done a good deal of work helping young people diagnosed with Attention Deficit Hyperactivity Disorder (ADHD). During the course of my history of science seminar, I had become curious about the origins of ADHD and why it had become so ubiquitous. Then I paused, expecting my supervisor to burst out laughing.

She didn't. Instead, we launched into an excited and rambling discussion that touched on ADHD, education, learning disabilities, parenting and giftedness (her children were attending a laboratory school where all the kids, and especially the naughty ones, were apparently 'gifted'). Not only did she think it was a great topic, but she also thought it was a subject that would interest the general public. 'There's a book there', she said assuredly, 'even if you don't go on for a PhD.'

As I headed out of her office and back into the cold, bleak December afternoon with a brand new MA topic and a determination to write a book on ADHD, what struck me was her fascination. She seemed genuinely enthused about the history of hyperactivity and, moreover, convinced that others would also be intrigued. And she was right. When I tried to explain my original topic to friends and family, they would simply look confused or ask cheeky questions about why anyone would lecture about boils. But the history of hyperactivity was the perfect conversation starter. Everyone from taxi drivers to philosophers was interested in ADHD and they usually had an opinion about it as well. Although I began the project purely out of curiosity, I soon realised that this was the sort of history that could matter.

After my MA, I went back to work as a counsellor, needing a break from academia and time to plan my next steps. But I continued to pick away at the history of hyperactivity, examining it from different angles and finding ways, however modest, of disseminating my research to the broader public. It soon became clear, however, that the implications of my research findings were not always straightforward. As with any topic that is highly controversial, the history of hyperactivity is complicated and does not lend itself to simple answers for parents, physicians or policy makers. It would have been easy, for example, to write a Foucauldian interpretation; indeed one of the first drafts of my MA thesis was just that. But the history of hyperactivity was not just about controlling children's bodies, although that played a considerable role. Parents and children exhibited agency in accepting an ADHD diagnosis and often negotiated or rejected accepted medical opinion about how best to conceptualise and treat their condition. Certainly, my first book, An Alternative History of Hyperactivity: Food Additives and the Feingold Diet, includes good evidence of such resistance.

Perhaps because of these nuances, I have had to look deeper for the policy implications of my work on hyperactivity, ultimately coming up with some fairly simple conclusions. First, and most generally, is the fundamental importance of history in informing debates about controversial topics. ADHD is contentious, there is no getting around that. But there are reasons why it is so, reasons that are rooted in history. If those entrenched on the various sides of the ADHD debates (for example, those who believe ADHD is simply a genetic neurological dysfunction versus those who believe it is simply a social construction) are faced with its history, then there is at least a chance that they will broaden their views.

Second, ADHD reflects a great deal about how we view children in Western society. Do we see childhood as an end in itself or a means to the end of producing economically productive adults? As someone who has worked as a careers counsellor, I realise this is a difficult question, but I also believe that the balance should be shifted somewhat more towards seeing childhood as a special period of life in its own right, where all options should be open, where thousands of flowers should be allowed to bloom. Maybe I haven't let go of Foucault altogether. 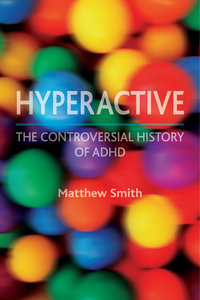