The use, mis-use and neglect of the past by policymakers is an irresistible target.  Whether it’s Margaret Thatcher’s insistence on the dangers of German reunification, Tony Blair’s disregard for the complexities of Iraqi history or Boris Johnson’s comparison of the EU’s aims with Hitler’s, political leaders have drawn historians’ ire.  The privileging of quantitative evidence, with its illusory assurance of ‘what works’, and the dominance of the short-term over the long view have further widened the perceived ‘history gap’ in politics.  At least, so the caricature goes. But what happens if we pause to check our assumptions?

Most historians would now hesitate to use the word ‘truth’ to describe what emerges from our work, at least to academic audiences.  Even those determined to present a particular account as definitive must acknowledge the provisional nature of any historical interpretation and the existence of multiple perspectives and approaches.  And yet we seem comfortable with the notion of ‘speaking truth to power’, and the implied entitlement to inform, correct and admonish those charged with political decision-making.  The emerging field of public history has been championing co-production and shared authority with museums, heritage organisations and community groups, and yet collaboration with policymakers remains beyond the pale.

It’s no great insight to observe that how we define a problem is important – it influences our approach and what options we consider.  If we think, for example, that the problem of the ‘history gap’ in government is one of cultural difference from academe – exacerbated by tight timescales, electoral pressures and a preference for the apparent certainty of numbers – then a certain range of solutions present themselves.  We would need to package the ‘truth’ in accessible language and succinct formats – policy papers and consultation responses rather than journal articles and books.  We would seek to build bridges with policy communities, holding workshops and expert seminars to connect the two tribes and territories.

But can we define the history gap as just an issue of communication and translation?  Historians are master debunkers when it comes to myths and assumptions, or so we like to tell ourselves.  So it should perhaps give us pause for thought that ‘speaking truth to power’ (even in policy-friendly briefing notes) is a rather neat and convenient notion – at least for us.  It’s only used, of course, by those who believe themselves to be in possession of the truth and under a moral obligation to share it.  But can we content ourselves with a sermonising model – instructing policymakers, otherwise liable to neglect or distort the past – without at least some critical reflection on our own scholarly attitudes, values and practices?

History, Policy and Public Purpose emerged from a recognition that connecting history and policy was as much about ‘historianship’ – why, how, where and for whom we ‘do’ history – as about policymaking.  Perhaps counter-intuitively, I had become much more conscious of my historical habits of mind while working in policy roles in government and higher education.  At the same time, I developed an appreciation of the constraints and pressures with which civil servants, advisers, MPs, committees and ministers have to operate.  The book engages with the intellectual and methodological issues related to historical thinking and practice, while taking the contextual realities of policymaking seriously.  Critiques from the ‘outside’, however well-founded, timely and judicious, are unlikely on their own to exert an on-going influence on political decision-making.

The book revolves around the second chapter, in which I explore how history could work effectively within those cultural and structural realities, and contribute to the processes of policy formulation.  The key manoeuvre I propose is a shift in emphasis from historical ‘content’ (what we produce) to ‘process’ (how we work).  Historians certainly have much to offer as expert mediators with the past, seen as a repository of potentially illuminating perspectives or an archive of analogies and long views.  The ‘pitch’ for history’s relevance to policy usually rests on such claims, and the History and Policy archive of over a decade’s worth of policy papers is a unique collection that shows how pertinent and powerful such insights can be.

Without undermining the value of these interventions, we can recognise that they form only part of the solution.  A focus on ‘content’ requires historians to establish policy relevance on a case-by-case basis. The process by which historians think and work, the conceptual tools and what educational psychologists have called ‘cognitive moves’ of disciplinary-history, are not so constrained.  I suggest that historians have something important to offer as part of the ‘collective puzzling’ at the heart of policymaking.  We may be ‘content’ experts – in foreign relations, health or welfare policy, for example – but we also bring distinctive habits of mind as historians, ways of questioning, seeking and reading evidence, checking assumptions and building arguments.  So my sense is that we need to move to a model of thinking with history in policy, rather than one focused only on bringing historical perspectives to the notice of policymakers.

That’s not to say that historical thinking is somehow the key to ‘better’ policymaking (tempting as that claim may be).  History is no more the master discipline than economics.  In the context of highly complex policy problems, I emphasise the centrality of collaboration – rather than competition – between different specialisms. If we want scholarship and informed debate to exert a greater influence on policy, we will all surely need to be advocates not just for the merits of our own disciplines, but for a genuinely rich ecosystem of expert advice.

An obvious line of criticism of the proposals in the book is that they’re idealistic.  So, it’s all very well to place historians as ‘insiders’ in government, but ministers would never listen.  Or, mixed policy teams that bring together economists and historians or philosophers make sense in theory, but in practice they would never exert the same level of influence.  Such criticisms are valid, but my response would be ‘yes, and?’.  If we want to be heard, to be part of the most important conversations about policy, critique is not enough.  We can recognise the scale of the challenge, while pursuing a policy of pragmatic persistence – policy is surely too important for historians to take any other course.  Indeed, the injunction made in 1984 by Oxford historian, Avner Offer, is perhaps even more pressing today: ‘neither detachment nor defiance will do.’

Dr Alix Green will be launching her book at a symposium event on Friday 24th June. Further information can be found here. 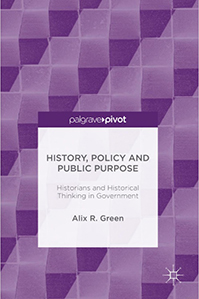