This volume grew out of a simple idea: if history matters for development policy, then historians have something important to contribute. The editors, two experienced analysts at the World Bank and two historians at Cambridge University, agreed that too often the contributions of professional historians to development policy debates have been marginalised. As a result, significant opportunities for interdisciplinary dialogue were being lost, and development policy itself was ultimately the poorer.

The chapters offer a crucial lesson to those who aim to promote international development: policy makers are attempting, usually with relatively minute instruments and blunt tools, to change ongoing national histories of enormous complexity. These histories resemble the course of a vigorous living flowing river. Those involved in development policy are attempting to influence these currents, as they continually negotiate their way from the present into the future, drawing on the resources of its past.

There are at least ten contributions which historical scholarship can offer those studying or practically engaged in development policy:

Chris Bayly's opening chapter explores the institutional origins of economic development, showing how certain 'developmental' institutions promoted by the British such as property rights, newspapers and statistical analysis only took root in India when they were adapted over decades into 'hybrid' institutions, suited to the local environment.

Subsequent chapters have been arranged in pairs, by development policy themes, focusing successively on Social Protection, Public Health, Education and Natural Resource Management. In each section, one historian presents a study of the topic in the past of a currently-developed country and the other focuses on the same theme in the history of a less developed nation, with each pairing followed by reflections from a development specialist.

In the first of these sections, Richard Smith shows how Britain's early modern Poor Law dating from 1598 could provide a radical alternative perspective for policy development. In many countries today the poor continue to be denied access to basic social protection: the provision of such services is deemed to be a 'luxury' that will receive serious attention only once a certain level of economic development has been attained. But in Britain, universal social protection actually facilitated economic development. These findings suggest that social protection should be designed as part of a coherent development strategy. Bin Wong's study of Qing China in the 18th century examines another non-democratic state which nevertheless focused quite effectively on protecting its populace and argues that there are long-term similarities to the health-promoting aspects of post-1949 China, when Party officials kept to the Qing practice of permitting local government considerable autonomy (a lesson temporarily ignored, at great cost, during Mao's Great Leap Forward).

In the second section, Sunil Amrith demonstrates how newly-independent India's public health provision became ineffective due to Nehru's top-down, technocratic approach. The exception of Kerala (with an unusual level of local political participation) proves that it required a much more localist effort to build effective health care institutions. Steve Kunitz's chapter studies the health of the USA's internally colonised American Indians during the same period - showing, once again, how a powerful, highly developed state can neglect the health of those lacking the local resources for their political self-mobilisation.

In the third section on education, David Vincent shows that in Victorian Britain, long before the central state enforced school attendance, a politically assertive and aspirational, though not revolutionary populace (exemplified by the Chartists) was spurred to increase its own literacy in response to well-publicised official figures showing how much variation there was around the country. Similarly Tim Harper shows that in colonial south-east Asia education was popular provided it could be 'indigenised' by local peer-educators, who subverted official norms, ultimately providing independent channels forming nationalist aspirations which were fulfilled after World War II.

In the final section, Paul Warde and Keith Breckenridge explore diverse outcomes associated with natural resources. Eighteenth-century Holland's control over shipping lanes from the Baltic basin did not translate into productivity innovations in industry; England's coal did. In southern Africa, the mineral wealth of the region produced diverse outcomes. Breckenridge explores the political process of establishing varying property rights regimes over the extraction of the different minerals, with implications for whether the wealth was used for public or private gains. The political challenge in southern Africa now is to adapt that legal inheritance to ensure that ordinary Africans have a greater share of their nation's wealth.

This book, in bringing a historical perspective to development policy, sheds a great deal of new light on old debates. It demonstrates the importance of agency for the people who actually live in developing countries. It also shows that their capacity to adapt development policies can be crucial in determining whether those policies take root and whether they promote the interests of the majority or a privileged minority. This can only be understood through an understanding of more of the historical complexity of each society. 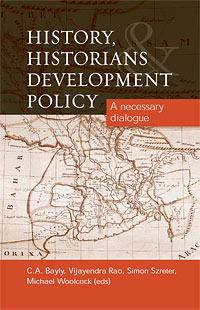