Governing Post-War Britain grew out of a set of paradoxes that sum up the dilemmas of both progressive and conservative government in the developed world. Why, when most citizens became vastly richer in the second half of the twentieth century, did politicians and other leaders become no more popular? Even taking into account the widespread scepticism about politicians which is a healthy part of any democracy - and which was much in evidence even on the eve of the ‘New Jerusalem’ General Election of 1945 - leaders became gradually less popular. Although by the 1970s, most voters could take for granted televisions, cars, telephones, computers and holidays, they rarely gave politicians any credit for their new-found prosperity.

On the other-hand, governments were less susceptible to blame when things went wrong. I saw this myself, growing up in the 1980s and '90s. Governments seemed able to win elections in the teeth of terrible recessions, as Margaret Thatcher did in 1983, the first that I actively followed. Witness John Major’s extraordinary against-the-odds victory, during a recession, in 1992. But then, as Major and Kenneth Clarke, his Chancellor, guided the economy through a strong recovery during the mid-1990s, voters increasingly treated them with derision and even contempt. In general, the rising tide of prosperity seemed to solve few political conundrums, while politicians often seemed immune from downturns that should logically have been lethal to their popularity.

Many answers to this puzzle have been proposed in the past. Increased incomes are unlikely to make individuals happier if their peers are becoming even richer, even more quickly. Poverty in the midst of affluence has continued unabated and relative poverty as well as income inequality has increased since the late 1970s. The hallmarks of the affluent society included downsides as well as upsides: increased pollution, drug use, divorce and crime rates. Conservatives and social democrats alike fretted about a society that seemed more atomised, more individualistic, less communal and less traditional - developments that evoked fear of change, as well as a sense of more open opportunities. Above all, voters began to fear that they had something to lose. The journalist Michael Shanks, in his classic book The Stagnant Society, labelled post-war Britain a ‘Janus-faced’ society, ‘in feverish pursuit of a prosperity it can never quite bring itself to believe in’. When growth slowed down, in the early 1970s, these easily-gotten gains looked to be both reversible and at risk. When things did go wrong, politicians of all parties could deflect blame onto immigration, rising crime and ‘degeneracy’, to their economic inheritance, or the course of the world economy. There was no straight or linear connection between the successes and failures of post-war policy and political popularity.

In Governing Post-War Britain I focus on the links between government and the governed - on the manifold connections between ‘the people’ and the policy making community in Whitehall and Westminster. While working as a schoolteacher and as a journalist, I experienced the disconnection between governments’ often-good intentions, and the way in which their increasingly detailed, but unrealistic, directions worked out in practice. This personal experience spurred me on to familiarise myself with the political science literature. Drawing on elements of both chaos and complexity theory, I develop a picture of a central government attempting to build better links outwards, into the country at large. At the same time, economics and social change were becoming more complex: the number and range of government policies, statistics, consultancy bodies and advisers all rose steeply, without any apparent increase in governments’ level of social and economic understanding, or capacity to shape or reshape national life.

This meant that each solution to policy problems ran into a series of unintended consequences and unforeseen problems. Incomes and housing policies adapted from Scandinavian examples ran into the unique British systems of industrial relations and the law of taxation. Successive governments’ attempts to force the Europeans to increase the world’s money supply, in concert with the Americans, came to nothing as Anglo-American defence and aid spending paradoxically undermined that global authority they were supposed to reinforce. The creation of the Parliamentary Commission for Administration or grievance-busting ‘Ombudsmen’ revealed grievous cases of maladministration and incompetence that Ministers later reflected they would rather had remained hidden. The land-use planning system, designed to increase the flow of land for housing, closed off the most desirable sites for building and caused four unsustainable housing booms between the 1950s and the 1990s. Increasing the provision of secondary and higher education seemed to undermine the role of skilled labour, while the divides between those educated beyond the age of fifteen and those who were not yawned ever wider.

And the lessons? These are hard to avoid for a book about near-contemporary British governance in our current, straitened times: we need sharper skills if we are more effectively to make the tough choices which we now face. My research for this book would suggest that governments have to work with difficult puzzles, as well as to exert power, and that they are stepping forwards into an ever-more complex and ever-less certain world. Building on that sense of ignorance in a complex world, it is better to make policy slowly, incrementally, progressing by reference to pre-determined wayposts and goalposts.

Above all, one should always be aware of what one doesn’t know, how much any individual politician or official depends on the front-line providers of services, and how perhaps whiter-than-white intentions can be construed and misconstrued outside the rarefied world of Westminster and Whitehall. For me, these observations help to sum-up and explain the paradoxes of modern British progress: the strange victories of a wealthier, but more confused populace, and a political elite that had provided a broad measure of prosperity, but was becoming increasingly frustrated with citizens’ refusal to praise, or co-operate with, their 'leaders'. 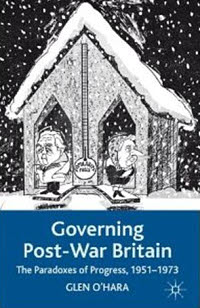