An Alternative History of Hyperactivity: Food Additives and the Feingold Diet

A short while ago a colleague sent me a podcast from National Public Radio (NPR) in the United States. A research team in the Netherlands had found that a olioantigenic or restricted diet helped to reduce symptoms in children diagnosed with ADHD or Attention-Deficity/Hyperactivity Disorder. I was only mildly surprised. Ever since the furore during the 1970s and early 1980s about the link between food additives and hyperactivity, made most famous by allergist Ben Feingold and his Feingold diet, there have been sporadic studies indicating that, despite medical misgivings, there was a link between diet and ADHD. Another recent trial, a rather impressive one designed by Jim Stevenson at the University of Southampton, also found that both synthetic food dyes and preservatives triggered ADHD symptoms, prompted a good deal of media interest and led to changes in how products containing food colours were labelled in the EU. Yet another blow for Feingold, I thought with a smile, and turned to the rest of my emails.

A couple of days later I returned to the NPR website to find out more about this new study, hoping that it might fit into some of my current research on the history of food allergy. In the meantime, NPR had put up some listener reactions to the story. They were not at all positive. One claimed that medication had long been proven to be the most effective treatment for ADHD and critiqued the structure of the Dutch study. Another argued that the link between diet and ADHD had been debunked in 'well-designed studies' and that the Dutch study misinformed parents trying to help their children. I wasn't surprised at all this time, but I was annoyed.

The reasons why these comments irked me help to explain why I believe the history of medicine can be particularly relevant in informing debates about medical issues and, in turn, help to shape health policy. Feingold's idea was largely based on clinical observations. While this might have been sufficient for many parents, who opted to try his diet. and the media, who was intrigued by the story, the medical community demanded that double-blind controlled trials be conducted to test his theory. What bothered me about the comments published on NPR's website was the assumption that these studies were 'well-designed' and that they showed unequivocally that the Feingold diet did not work. Indeed, this perception has long been held by physicians since Feingold's death in 1982, meaning that the Feingold diet has rarely been a treatment offered to parents of hyperactive children. When I began investigating the history of the Feingold diet for my PhD, it did not take me very long to realise that this perception was incorrect. Not only were most of the studies were poorly designed and questionably interpreted, but they also yielded both positive and negative findings. Moreover, the experiences of the thousands of families who successfully employed the diet barely registered when decisions were being made about its validity.

An Alternative History of Hyperactivity: Food Additives and the Feingold Diet analyses why the Feingold diet was rejected by mainstream medicine on the basis of such shaky evidence. I examine why Feingold's hypothesis became so popular, yet also controversial, arguing that a wide array of non-scientific factors, ranging from Feingold's personality and manner of presenting his thesis, to the influence of the food, chemical and drug industries, were more crucial to the fate of his idea than the scientific evidence garnered from the trials. It is the importance of these factors that makes historical analysis a useful tool in helping to resolve gnarly and tangled medical debates such as those that have enveloped topics such as ADHD.

The 'lessons' medical historians have for health policy makers are not always easy or straight-forward. As a historian, I cannot say whether the Feingold diet works or not. I can say that I have interviewed dozens of families who have had success on the diet and I can say that the trials that tested it were often poorly designed, conducted and interpreted, but I am unable to state that it is an effective treatment for ADHD (as a parent, I can say that I avoid food additives as much as possible when it comes to feeding my son). What I can do as a historian is help to reveal where researchers and policy makers possibly went wrong in the past and suggest how they might make more informed decisions in future.

An opportunity to do so might well be in the offing. Earlier this year the Food and Drug Administration (FDA), bowing to public pressure, decided to convene a panel to discuss the link between food additives and ADHD once again, nearly forty years after Feingold first began prescribing his diet. At stake was whether or not to add a warning label to foods that contained certain food colours, one similar to the one the European Food Safety Authority had mandated in 2010. In the end they decided to delay their decision, due to a lack of rigorous studies and data, and called for more research to be done into the subject.

On the one hand, I find this decision gratifying. It reflects my argument that most of the original trials were problematic, rather than revealing, and that more research should be done to test the behavioural effects of food chemicals. But on the other hand, I wonder if the trials designed this time will be much different. If the history of the previous attempts to test Feingold's theory is not examined, who is to say that the same mistakes will not be repeated, that the influence of food, chemical and pharmaceutical companies will weigh heavily on the results and that the experiences of Feingold families will be overlooked? I believe that history has a role in resolving these debates; I only hope that the FDA agrees with me. 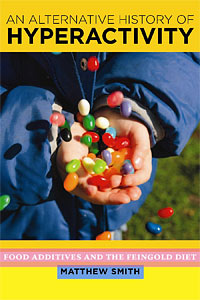