Alternatives to State-Socialism in Britain: Other Worlds of Labour in the Twentieth Century

Series: Palgrave Studies in the History of Social Movements (December 2016)

Marxist and Fabian state-socialist perspectives have tended to set the research agenda in Labour History. The editors of this new collection, challenge this approach to the study of the British labour movement and working people in the C20th. In the process, they question a mainstream Labour History that focuses on strikes, nationalization, and state-socialism and any straightforward ‘forward march’ in this direction. Instead, they explore neglected, but central, aspects of working class experience and political awareness over the C20th - including religious nonconformity, self-organisation and left libertarianism - and show how this diversity has been quashed by a narrative focussing on class cohesion and secular state-socialism.

The editors’ own unifying alternative theme is the continuing centrality of liberal-pluralism in C20th British labour historical theory and practice, stretching from the conservative-realist wing of Hugh Clegg and the trades unions to the radical-utopian wing of GDH Cole and Colin Ward. The central feature is an emphasis on voluntary civil society or community as a channel for social change. The structure of the book demonstrates this alternative reading. Part I: Other forms of association, includes chapters on trade unions, the Co-operative Party, working class women community activists and Protestant Nonconformists, as providers of educational and social services. Part II: Other leaders, takes in three central industrial relations practitioners: Edward Cadbury, Walter Citrine and Frank Chapple. Part III: Other intellectuals, explores G.D.H. Cole, Michael Young, and selection of New Left thinkers critical of post-war state-socialism. The book is devoted to recapturing the liberal-pluralist heart or mainstream of British labour movement historical experience. However, we are also concerned to absorb any History & Policy lessons for the future of British society. So the paper will conclude, as does the book, by the editors looking forward to civil society after state socialism and beyond neo-liberalism and asking what a balanced ‘mixed economy’ of market, state and civil society might look like.

The authors challenge the conventional wisdom that dominates much of twentieth century British labour history. They show that even recent historians, such as Selina Todd, Mike Savage and Ross McKibbin, still work from the Fabian and Marxist assumption that a united working class has been marching towards a state-socialist future. They uncover an alternative tradition of liberal-pluralism, found not only in industrial relations academics, such as Hugh Clegg and Allan Flanders, but also in libertarian and educationalist thinkers, such as G.D.H. Cole, Michael Young and Colin Ward. They argue that labour history needs to broaden its scope from an old left obsession with state-socialism, to include a range of movements and ideas that was both more diverse and more popular than the conventional wisdom allows.

Whiting explores the role of trade unions and the relationship between the individual and collective organisations in a liberal political system. In twentieth century Britain trade unions had an accepted place in national life amongst other associations. The ties between the members and their unions are assessed, particularly in connection with the shop steward movement which revived in the post-war boom after 1945. But the unions’ status underwent a dramatic decline at the end of the 1970s when Margaret Thatcher’s distinctive political rhetoric about the importance of the individual was directed particularly forcibly against them. Although trade unions have been valuable in defending people’s interests at work, a persistent line of thought has always questioned their impact on individual freedom.

Davidson traces patterns in the activism of working-class women who contributed to the development of civil society in Britain during the first half of the twentieth century. Her chapter considers their participation in voluntary work and their statutory roles as poor law guardians and local councillors. It assesses how they achieved social reforms that were humane and inclusive; and argues that they encouraged an expanded citizenship for working-class women. Local activism, indeed, was highly viable before the welfare state, and in some respects remained central even after. Thus by foregrounding the central state, the reforms of 1948 can be seen as undercutting the active, participatory and democratically accountable civil society that working-class women activists had created in the first half of the twentieth century.

Vail examines the impact of Protestant Nonconformity on English society in the twentieth century, with particular reference to working class communities. He considers the reasons for the breakdown in the relationship between Protestant Nonconformists and political Liberalism. He then examines the continuing impact of Nonconformists on English working class life, particularly through a range of auxiliary organisations providing educational and social services: including the Adult Schools, the Brotherhood Movement, and the Brigade Movement, as well as their involvement in early experiments in adult and further education. Finally, he gives a critical examination of the prevalent assumption of secularisation, and considers parallels between Protestant Nonconformists’ responses to late twentieth century cutbacks in welfare provision and their earlier activities prior to the welfare state.

Kimberley studies the important employer, thinker and author Edward Cadbury, who played a key role in a well-established Quaker family firm in the early twentieth century, and whose Quaker values deeply imbued his management approach.  Integrity, participation and quality were the cornerstones of Cadbury’s business philosophy, and became the foundation on which the family firm developed a reputation for fairness, equality and innovation. But his approach went beyond what might normally be expected of a progressive employer: to embrace active support for trade unions, collective bargaining and especially campaigns for better wages and working conditions for women. In this way, the mature expression of Edward Cadbury’s Quaker values suggests a set of relationships that might be better captured in the concept of a business ‘covenant’.

Moher explores the role of Walter Citrine as leader both of the British Trades Union Congress (TUC) and of the international trade union movement during the heyday of communism and fascism. Citrine used his influence at the TUC to redefine the role of trade unionism after the 1926 General Strike, away from an emphasis on mass strikes towards one of principled co-operation with employers and pressure for social democratic policies. And he used his international role to inform British trade unionism and political life more widely of the dangers of dictatorships of both the right and the left. In this way Walter Citrine was able to use his access to all the prime ministers of his day to give the trade unions a major standing in British society.

Aikman challenges the notion that the British trade union movement was stolidly ‘Labourist’ in character, and bereft of any intellectual foundation. Frank Chapple was one union leader who had his own distinct political ideas, derived from his practical experience as general secretary of the Electrical, Electronic, Telecommunication and Plumbing Union (EETPU). From being an enthusiastic Communist as a youth, Chapple’s efforts to oust corrupt Communist officials from his own union, together with his experience of the broader role of the left in the worsening of industrial relations in the 1970s, combined to sour his attitudes towards socialist politics. Chapple’s solution was to reduce his union’s dependence on the Labour Party, pursue a ‘post-Labourist’ differentiation, and even make overtures to the newly-founded Social Democratic Party (SDP).

The major intellectual contribution of G.D.H. Cole was to Guild Socialism, but after that movement’s collapse in the early 1920s he transferred his allegiance to the Labour Party. During the latter part of his life Cole was established as the pre-eminent Labour intellectual, but was also becoming increasingly restive with parliamentary politics. He agonized about the increase in size of the social unit, criticized the decline of democratic participation and growth of bureaucracy in the trade-union and co-operative movements, and lamented the flawed programme of nationalization of the Labour governments of 1945-51. Indeed, G.D.H. Cole continued to identify himself as a Guild Socialist: that is, he was a socialist pluralist, or libertarian socialist, and perhaps surprisingly sympathetic to anarchism.

Michael Young described the construction of the Labour Party’s 1945 election manifesto as ‘Beveridge plus Keynes plus socialism’. Although Young is perhaps most famous for his major contribution to this seminal document, his was an uneasy relationship with a Labour Party of highly centralised and large-scale state enterprise. The chapter assesses Michael Young’s contribution to thinking about alternatives to Labour’s more traditionally state-socialist concerns. It charts his progress from within Labour’s Research Department in the late 1940s and subsequent contributions to social democratic revisionism, through a long career of social entrepreneurship, to the Social Democratic Party and then back to New Labour. It focusses on Michael Young’s attempts to revive marginalised themes of Labour’s traditions in non-statist, decentralist, participatory forms of public intervention.

The UK’s welfare state has been much criticised by thinkers and activists of the New Right since the rise of Thatcherism. However, it has also been much criticised by thinkers and activists of the left. This chapter explores how such criticisms were developed in the work of Colin Ward, Sheila Rowbotham, Stuart Hall, Paul Hirst and Hilary Wainwright. It focuses on a shared theme: the need to develop forms of state-society partnership in the design and delivery of welfare. In their thought, the state would retain its role as a mobiliser of resources; but decisions about what should be done with these resources, in areas such as housing, child-care and education, would pass to groups in a democratic, participatory civil society.

The authors consider what can be learnt from the opening up of British labour history in the contributions to this collection, and taken forward to inform debates about the future of society and politics. They distinguish between three spheres: the market economy, the state and civil society. They argue that neo-liberals threaten to allow the market economy to squeeze out communal values; but equally state-socialists threaten to expand the state as a substitute for voluntary association. A misplaced nostalgia for a mythical state-socialist past will only consolidate the current worship of large scale, centralised solutions. A better appreciation of British labour’s real history could release resources for the revival of human scale, diverse, civil society experiments. 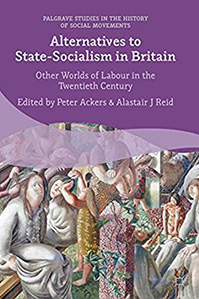